The UOC is on the Library Map of the World, where it shares its experience in quality education and in promoting the gender perspective in teaching and research

What can libraries do to help tackle the major global challenges on the political agenda? This is the question that the world's leading organization of library professionals, the International Federation of Library Associations and Institutions (IFLA), asked itself a few years ago. With the Library Map of the World project, IFLA set out to bring together the experience of libraries in meeting the United Nations' Sustainable Development Goals (SDGs). This has given rise to a map featuring a variety of activities and initiatives to promote literacy and free access to information. The UOC was the first Spanish institution to participate, sharing the contribution its library makes to the promotion of equality and women's empowerment. 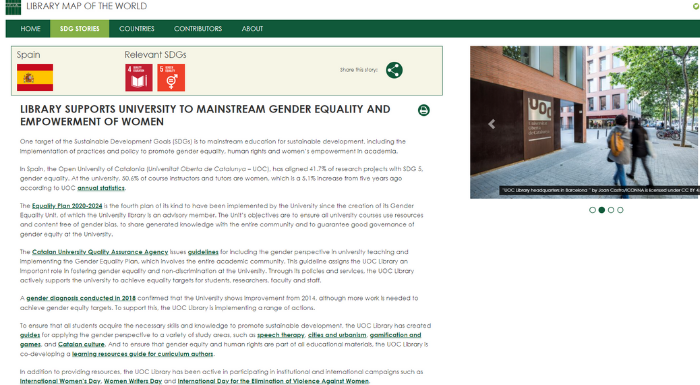 Pastora Martínez Samper, the UOC's Vice President for Globalization and Cooperation and head of the Equality Unit, said: "One of the guiding principles of the UOC's Gender Equality Plan is to mainstream the gender perspective across the University, making it a joint commitment undertaken by the entire community."

In order to advance towards this institutional goal, the Library and Learning Resources team has had a liaison person for gender issues since 2019. Mireia Castillón is responsible for identifying areas for improvement and making new proposals. She said that "We wanted to explain the activities carried out by our team and thus highlight the contribution of libraries, specifically university libraries, to the 2030 Agenda. We want to encourage them all to take part. We have a lot to say!"

"We want to encourage libraries all to take part. We have a lot to say!"

Ciro Llueca, director of the UOC's Library and Learning Resources department, was quoted saying that "Libraries help people develop their ability to use information effectively" and that "IFLA is the leading authority worldwide for libraries, and this recognition encourages us to maintain our commitment to providing access to knowledge for the entire university community".

The UOC Library is one of the eight international institutions to showcase its activities in the Library Map of the World in order to make faster progress in achieving gender equality, SDG 5. In addition, it appears as one of the 37 libraries contributing to quality education, SDG 4, one of the cornerstones of the University's strategy for the 2030 Agenda. 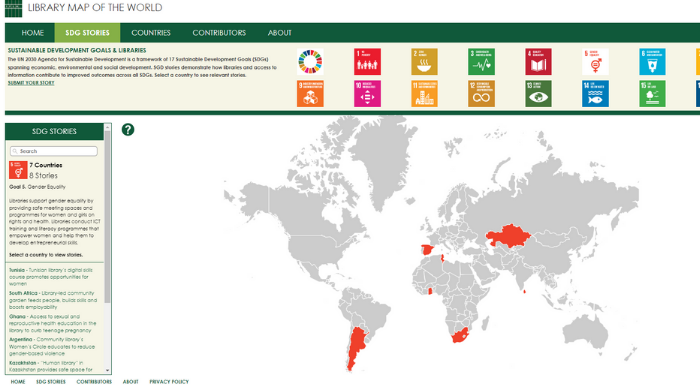 Recommended reading for teaching and research with a gender perspective

The Equality Unit, the Library team and the UOC's Gender and ICT research group, GenTIC, have put together a selection of titles about university equality units to promote the gender perspective in higher education. According to Maria Olivella, coordinator of the UOC's Equality Unit, "There is a growing consensus and an increasingly robust regulatory framework on the importance of university equality units and their role in mainstreaming the gender perspective. However, we are still working out how to do this. So, we need to find resources and references for designing and implementing an equality plan".

Among the upwards of 100 recommended items, there are equality plans from different universities in Spain and abroad, as well as academic literature such as books, project summaries, articles, websites and reports. In addition, the guides for university teaching with a gender perspective, drawn up by the 22 universities in the Vives Network, are also included. The publications aim to provide teaching staff with the tools to teach in a way that avoids transmitting knowledge from an androcentric point of view.

The UOC provides students with the learning resources they need throughout the academic year for each of their courses, and the Library and Learning Resources team offers advice and support to teaching staff in the selection and production of these educational materials. Some materials are produced directly by the University, as if it were a publisher or an audiovisual production company, and experts are commissioned in each discipline.

The Library team shares a series of instructions and tools with the authors so that the contents they produce are inclusive, respectful and representative of everyone. For example, the guide includes an interactive infographic with ways to avoid the use of sexist language, and an image bank with transgender and non-binary models.

The UOC has updated the citation guidelines that it shares with its community. On the Library's How to cite page, the inclusion of authors' full names is recommended in bibliographical references, especially in international citation styles, such as the APA and Vancouver systems, which often only use initials. ​Integrating this guideline into the academic workflow can help identify women's contributions and facilitate the analysis of parity in reference lists.

The team of librarians also publishes guides with a selection of content to invite users to rethink various disciplines, such as speech and language therapy and urban design, from a gender perspective; to promote the 2030 Agenda, or to raise awareness of prominent women in traditionally male-dominated fields.

It has also created a collection in the UOC's institutional repository aimed at promoting final bachelor's and master's degree projects that address issues related to women's, men's, feminist and LGBTQI studies.

IFLA and its Library Map of the World

IFLA is the leading international body representing the interests of library and information services and their users. It was one of the actors consulted in the process of drafting the UN 2030 Agenda, and its Library Map of the World project aims to collect reliable statistics from libraries around the world as well as qualitative information, such as projects related to the achievement of the SDGs.

IFLA's goal is to demonstrate that libraries and access to information contribute to improving the results of the 2030 Agenda.