Online gender-based violence: types, myths and content for preventing it

Last year, 855 women and girls were victims of internet sex crimes in Spain; 86% of them were underage girls.

25 November has been declared International Day for the Elimination of Violence Against Women in the aim of highlighting all kinds of violence (physical, psychological, sexual, etc.) committed against women for the simple fact of their sex. With the support of lecturer Irene Montiel, on this date we shall be taking an in-depth look at the concept of gender-based cyberviolence and, more specifically, at one of the main forms it takes: internet sex crimes.

A range of studies show that women are one of the groups most vulnerable to cyberviolence. Almost two out of every ten women in Spain have been victims of sexual harassment, and say they have received "improper, degrading, threatening or offensive" messages on social networks such as Facebook, Instagram and Twitter. Also, 16% of interviewees have felt "offended, degraded or intimidated" by emails, WhatsApp messages or texts.

Gender-based cyberviolence comes in many different forms, from the sending of threats or insults on the web, to posting sexist or misogynist comments and even including the sharing of intimate images without the person's consent.

Gender-based violence in the online world

"The incorporeal nature of relationships, the speed, the lack of boundaries, the transnational, asynchronous character and the sense of anonymity" are some of the features that make the internet a fertile breeding ground for the criminal conduct of online offenders and for finding their victims", explains Irene Montiel Juan, an expert in internet sex crimes who teaches courses for the UOC's Bachelor's Degree in Criminology Master's Degree in Cybercrime.

"Today, anyone putting sensitive information online is a potential victim", she adds.

At the same time, in a digital environment, victims have to deal with a lack of safe spaces, as "people can be attacked or humiliated 24/7, anywhere" as well as a lack of defence due to "the loss of control", as in the case, for example, of the spreading of intimate images. In addition to these obstacles, Montiel highlights another: the blame that is often attached to victims by people in their social environment and the professionals who are supposed to help them.

Another significant factor for victims is that the digital environment "often hinders awareness of the abusive nature of interactions", explains Montiel.

The internet users can have difficulties in "acknowledging that their experience constitutes abuse and that those affected are victims".

Cyberviolence against women and girls link opens in a new window

A report by the European Institute for Gender Equality investigating cyberviolence against women and girls. Provides data on cyberviolence gathered in 2017, as well as an explanation of the forms of online gender-based violence on the web and the legislative framework covering this kind of crime.

Violence against women: an EU-wide survey link opens in a new window

One in ten women has experienced some form of sexual violence since the age of 15. This is just one of the findings of this wide-ranging European survey of gender-based violence from 2014, which saw the participation of 42,000 women from a number of European Union countries.

An Ipsos/Amnesty International graph with data from 2017 showing the actions most commonly taken by women worldwide after suffering online abuse or harassment. 57% of participants blocked the account bothering them on social networks and only 8% reported the online harassment to the police.

Study of cybercriminality in Spain, 2020 link opens in a new window

The eighth report by Spain's Ministry of the Interior collating information on cybercrime from all the country's police forces. Its figures show that, in 2020, a year marked by the COVID-19 pandemic, cybercrimes increased by 31.9% over the previous year.

Professor Irene Montiel groups the forms sexual cybercrime can take into three main categories, based on their cause: exploiting abuse, with an underlying financial motivation; improper sexual solicitation, with the goal of ensnaring the victim – adult or child – in sexual activities or to threaten or coerce them, and sexual abuse based on images with intimate or sexual content, which can be due to a number of reasons.

In Spain, 2020 saw 855 women and girls falling victim to internet sex crimes, 86% of whom were underage girls. With regard to the perpetrator, in 95% of cases, those responsible for these kinds of crimes were men and, of 734 recorded cases, 70 were committed by underage boys.

"Often, people involved in these situations, especially the very young, are not aware they may be committing a crime (for example, when sharing an intimate image of a third party) or that they are the victims of one (as when they are pressured into sending an intimate image)", warns Montiel. "What's worse is that they don't know they can ask for help and are entitled to receive it."

According to the expert, the lack of up-to-date figures with breakdowns on youth social cybercriminality helps keep the phenomenon hidden, thus bolstering the feeling of impunity on the part of the perpetrators and a lack of protection for and the helplessness of the victims.

The online world has opened the floodgates to new forms of abuse and harassment. This situation has given rise to new concepts and terms that we would like to share with you.

The main myths around sexual cybercrime

For Irene Montiel, the myths and falsehoods surrounding sexual victimization on the internet can contribute to the fact that people behave riskily online and don't always realize that they are the victims of a crime. These are some of the most widespread ideas:

Prevention plays necessary and vital role in the fight to stop any kind of gender-based violence. Set out below is a set of tools and resources that can be found online with recommendations on preventing gender-based cyberviolence.

Let's stop cyberbullying before it starts

In this TEDx talk (in Spanish), Professor Irene Montiel deals with cyberbullying, a group phenomenon that continues due to group behaviour. 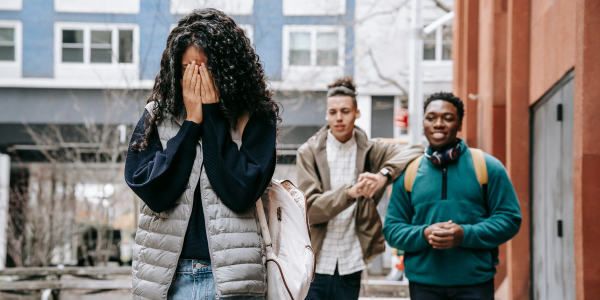 A guide in Spanish to gender-based cyberviolence from the Federation of Progressive Women, offering information and resources on the web covering what the law says and how to deal with such a situation.

Part of a website in Catalan researching into the relationship between new technologies and women, with the aim of carrying out training and actions to foster a gender perspective within the "Web 2.0".

FemTechNet. Do Better link opens in a new window

A listing of resources to help keep yourself safe in digital spaces and make sure that you are not harming others with your digital practices.

A web page in Catalan fostering the culture of peace with 15 tips and ten animations providing tools for an ethical use of social media and enhancing coexistence between users.

A study programme focusing on digital security with a gender perspective aimed at offering trainers with tools to include digital protection in their work.

Take Back the Tech. Safety Toolkit link opens in a new window

Security-in-a-box is a collaborative project devoted to digital security and privacy, providing advice on how to protect your smartphone and how to surf the web securely and anonymously.

A blog suggesting equality policies to counter sexist behaviour online and providing users with digital resources to prevent it.

A practical guide in Spanish covering the non-consensual spreading of intimate material.

A web page of Spain's Ministry of Equality with information on gender-based violence and other forms of violence against women.

A web page from the Catalan Women’s Institute offering services, resources and tips regarding male violence against women.

"There is a widespread fear of public spaces among young girls, especially in relation to being sexually assaulted" link opens in a new window

Interview with Maria Rodó de Zárate, researcher at the UOC'S In3 Gender and ICT group

Final project taking an in-depth look at feminist self-defence as a resistance practice to achieve equality in the light of structural, symbolic and everyday male violence against women.

Final project examining the work that professionals from the Crime Victim Support Service provide in the courts in gender-based violence cases.

By Patricia Escribano Tortajada.
A bachelor's degree final project examining whether one of the main reasons why so many women fail to report gender-based violence is concern about their children's future.

A bachelor's degree final project involving a quantitative study of violence carried out and suffered by adolescents aged between 14 and 17 in the town of Palafrugell (Girona).

The UOC's commitment to equality can be seen in our zero-tolerance approach to sexual harassment and harassment based on sex, sexual orientation or gender identity.