In the 10th Scientific Publishing Seminar, Pilar Rico presented the services offered by the FECYT to bring about improvements in scientific journals

Two new requirements for endorsing the quality of scientific journals: having an open-access policy and including a gender perspective

Five years ago, the UOC’s Scientific Publishing Seminar was launched as a meeting and reflection platform for the editorial teams of the University's various academic journals. It has been held ten times now, addressing issues such as alternative metrics, scientific dissemination, the peer review process, publication ethics, journal visibility and open-access publishing.

In the tenth and most recent seminar, Dr Pilar Rico Castro, Director of the Open Access, Repositories and Journals Unit of the Spanish Foundation for Science and Technology (FECYT), was the guest speaker. During her presentation, Rico presented the national guidelines for increasing the quality and visibility of journals and strengthening the link between science and society. She also responded concisely and transparently to questions from the audience.

Pilar Rico began the session by stating that the FECYT, created in 2001, aims to assist the implementation of science and technology policies, before explaining that the Foundation's framework for action are the parameters defined by Spanish and European guidelines. According to Rico, the FECYT acts as the "engine room of the national R&D&I system", and the services offered to Spanish scientific journals are of a "regulatory and redistributive" nature. Two such examples are the FECYT Quality Seal, for which journals apply on a voluntary basis, and the María de Guzmán Call for the Promotion of Scientific Research of Excellence.

The Support Service for the Professionalization and Internationalization of Spanish Scientific Journals (ARCE) was created in 2006, with the FECYT Quality Seal being one of its initiatives. Journals are awarded this distinction after demonstrating that they meet a number of requirements (either mandatory or recommended). The evaluation process is divided into two phases: editorial and scientific quality, and evaluating the quality of content in their area of expertise.

This accreditation aims to counteract the bias and limitations imposed by international bibliographic reference databases. During the Seminar, Rico stated that "indexing does not equate to quality," making it clear that there are significant biases in the main journal classification indexes. According to Rico, the Quality Seal aims to highlight the scientific and editorial quality of journals, using a model that is in line with rigorous international standards.

672 journals applied to the 7th call for applications for the Quality Seal (July 2021). Of these journals, 380 had their Seal renewed and 138 obtained it for the first time. Unlike international indexes, journals from the Social Sciences and Humanities areas are particularly well represented in the FECYT resolution. In fact, in order to lend greater visibility to journals from these fields, the first Visibility and Impact Ranking of Spanish Humanities and Social Sciences Scientific Journals was launched two years ago. This ranking is mentioned in the Royal Decree that regulates the criteria for six-year research periods.

Pilar Rico talks about whether agencies take into account journals' rankings when carrying out assessments. 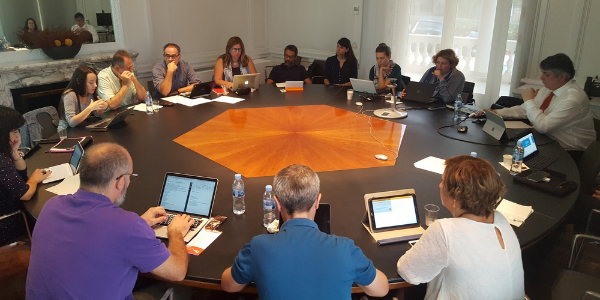 All scientific journals published or co-published by the UOC that, due to their characteristics, are eligible for this recognition, have received the FECYT Quality Seal. These are Artnodes; IDP. Revista de Internet, Derecho y Política; Digithum; BiD: Textos Universitarios de Biblioteconomía y Documentación; and ETHE: International Journal of Educational Technology in Higher Education.

In the last call for applications for the Quality Seal, the FECYT included some new criteria. Demonstrating and highlighting the existence of open access and re-use policies in journals became a sine qua non condition. Good editorial practices in gender equality were also added to the recommended requirements: "journals must obtain a positive score in all mandatory indicators, and at least two of the eight recommended indicators."

In order to contribute to gender equality in research, in the last call for applications, candidate journals were eligible, for the first time ever, for a special mention of good editorial practices in terms of gender equality, with the journal needing to meet five requirements in order to receive this recognition: besides demonstrating gender parity in both editorial teams and among reviewers, the journal also had to include the full names of its authors and confirm whether the research samples analysed had taken gender into account in order to detect differences in the outcome. Another requirement is that they have specific recommendations in favour of the use of inclusive language in research papers.

Rico answered questions from seminar attendees on the implementation of open science, such as the publication of research data and the search for alternatives to scientific evaluation, as outlined in the San Francisco Declaration on Research Assessment (DORA). Rico also spoke about some of the main issues that are preventing faster progress in these areas:

"changing the paradigm is a complicated exercise at the national and European levels."

In addition to the consolidation of the impact factor in the current research evaluation model, which was established with the first set of science and technology policies, Rico warns about another issue:

"If we are not careful and we do not strengthen institutional services and diamond journals (which are the majority of Spanish journals), the gap between rich and poor countries will widen."

She warned of the risk of continuing to publish in indexed commercial journals if they shift to an open-access subscription business model with article processing charges (APCs). To avoid the commercialization of research data, Rico explained that the European Open Science Cloud (EOSC), the European initiative to build an open data infrastructure that is "managed by public institutions and financed with public money", is expected to mature.

The Director of the Open Access, Repositories and Journals Unit also announced some of the open science projects that the FECYT is currently involved in, such as helping to create a European standard of diamond journals (DIAMAS). She explained that the aim of the Foundation is to defend journals with this open publication model, free of charge for authors and readers alike, ensuring that it is not only commercial publications that are taken into account.

At the Science Publishing Seminar there was also an opportunity to discuss some of the difficulties faced by new and growing journals, such as the difficulty of determining the nationality of a journal with international co-publishers, and the challenges and contradictions involved in the acceptance of DORA by institutions.

Rico also concluded that it is necessary and enriching to create spaces such as this seminar, in which public administrations and journal editors can share their experiences and discuss the areas in which they can improve.

Pilar Rico Castro holds a PhD in Government and Public Administration from the Complutense University of Madrid. She is currently Director of the Open Access, Repositories and Journals Unit of the FECYT. Her main task is to support the Ministry of Science and Innovation in the design, implementation and evaluation of national and European open access and open science policies.