Knowledge dissemination in "the game of knowledge"

One of the speakers at the UOC's 8th Scientific Publishing Seminar was Jesús Zamora Bonilla, professor of Logic and Philosophy of Science and dean of the Faculty of Philosophy at UNED.

What are the essential aspects of scientific communication viewed through the lens of philosophy? What is the economic understanding of the philosophy of science? In his lecture "The game of knowledge", Jesús Zamora Bonilla, dean of the UNED's Faculty of Philosophy, weaved a discourse in which he connected apparently unrelated disciplines such as philosophy, economics and communication and concluded by highlighting the importance of high-level scientific dissemination.

This lecture was given during the UOC's 8th Scientific Publishing Seminar, which focused this year on the dissemination and visibility of research results. The seminar brought together academic staff working in the editorial teams of scholarly journals and the university's scientific communication professionals. As has become tradition, Marta Aymerich, the UOC's Vice President for Strategic Planning and Research, opened the seminar by highlighting the journals' importance for the UOC's institutional strategy.

What games are played in science?

Coinciding with the commemoration of World Philosophy Day on 19 November, Zamora Bonilla proposed applying economic game theory to the analysis of scientific practice and the philosophy of science. Applying this perspective, the guest speaker focused attention on the subjects (the "players") and on their decision-making, conditioned by their interactions with other stakeholders. The different players' strategic interdependence is bounded by the rules of play of research.

Zamora Bonilla conceives scientific communication as a "game of persuasion", in which authors, through the paper, present arguments in favour of certain conclusions so that they can be recognized by the academic community as a solution for a scientific problem. The researcher's learning process also consists of learning which rules determine whether a particular argument can be considered valid in a particular discipline. 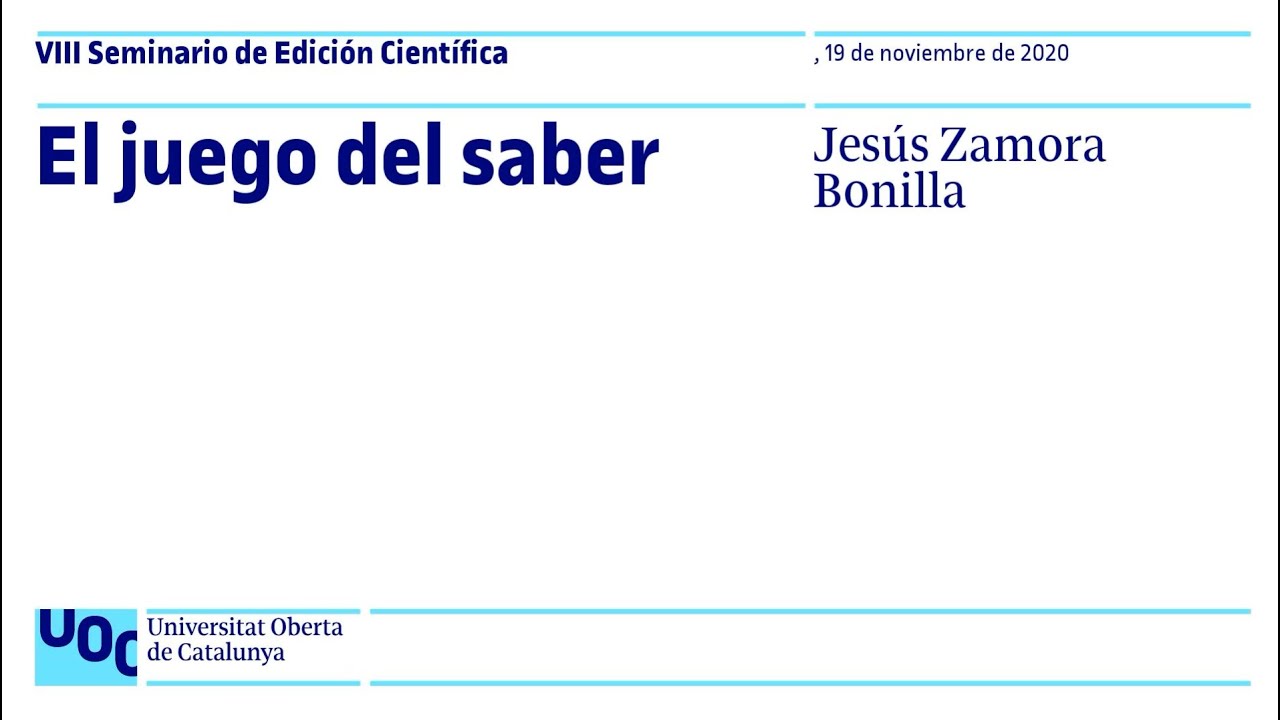 From paper to textbook

This game of persuasion continues when there are several arguments in favour of certain conclusions and a specific result crystallizes in the scientific knowledge system, at which point it ceases to be considered a debatable proposition to become virtually mandatory. Zamora Bonilla calls this growth the "coral model": at the top, in the tentacles, there are the papers' ephemeral conclusions, which are open for debate; and at the bottom, the solidified results that become the textbooks. However, consolidated knowledge can erode and also require review.

​Broadening the game of science

The lecturer identified four main types of scientific communication: the technological application of science; scientific dissemination, for communicating general interest subjects to a lay audience; journalism, which takes research as a newsworthy object; and marketing, developed to favour a given organization's interests.

Outside of the research context, in extra-scientific communication, new players with other economic, ideological or educational interests become involved. In addition, a new scenario opens that is not governed by established rules analogous to the scientific rules. Hence the importance of high-level dissemination, "reliable, authoritative sources" which the audience or the communicator can consult and which are usually promoted by public or philanthropic institutions. The natural format of this type of scientific communication is precisely the specialized journal.

Scientific dissemination is an essential issue that absorbs increasing amounts of time and space in the planning of scholarly journals. The aim of this seminar was to advance in the reflection on the dissemination of content with the editorial teams and share objectives and practices with the people involved in communicating the university's knowledge.

This half-yearly event, coordinated by Elsa Corominas, is part of the UOC's ongoing reflection process on its scholarly journals. Since the first seminar was organized three years ago, numerous experts have taken part in the seminars, helping to shed light on different aspects of scientific publishing. These have included both UOC academics, such as Candela Ollé, Pastora Martínez, Àlex López-Borrull, and outside experts, like Félix de Moya (SCImago), Mari Vállez (UB), Aina Borràs (Clarivate), Ernest Abadal (UB), Fernando Aguiar (CSIC) and Isidro Aguillo (CSIC).

The eight seminars have addressed issues such as the mentoring provided by universities to professors and researchers in the management of their scientific journals. This mentoring is intended to support the institution's strategy, which pursues above all to ensure the editorial project's sustainability, foster quality in its form and content, and contribute to giving maximum visibility.

All of the journals co-published by the UOC share two points in common: the confluence between social sciences and technology, and open access publication of the content so that the knowledge is accessible to everyone. Their international presence and academic impact have grown steadily in recent years.

Holder of doctoral degrees in Philosophy and Economics from the Autonomous University of Madrid, he is a professor of Logic and Philosophy of Science, the dean of the UNED's Faculty of Philosophy, and the director of the UNED's postgraduate programme in Journalism and Scientific Communication. He is also the creator of DivulgaUNED and has written a number of popularization books, such as Sacando consecuencias: una filosofía para el siglo XXI (Learning lessons: a philosophy for the 21st century).