Mediation is a conflict resolution procedure alternative to the legal channel. Intervention in the conflict by an impartial third party fosters dialogue to achieve an agreement between the parties, in which there are never winners or losers. The parties use mediation completely voluntarily, as a way of avoiding a legal process.

Tools to define and understand mediation, an alternative to the legal channel for conflict resolution.

Mediation on Wikipedia. Provides the definition, history, process, uses and other information of interest, as well as links on the subject.

Section on mediation from the European e-Justice Portal. Provides information on the nature of mediation, mediation in the European Union and in the Member States.

Key principles and stages of mediation, from the European e-Justice Portal.

The four basic characteristics of mediation, set out by the Ministry of Justice of the Government of Catalonia.

Mediation Law and Practice link opens in a new window

Manual on mediation (the process, types of mediation, the figure of the mediator, etc.), practice and legal implications.

Mediation as a method of conflict resolution can be used in almost all spheres where there is a conflict. Nevertheless, there are some fields in which mediation has been strengthened. Next we detail some of the spheres in which mediation is applied more regularly.

Private law is a branch of law that regulates the interests and relations between individuals. It encompasses civil law, commercial law, private international law and labour law. Mediation is used in all these branches of private law, but we particularly emphasise its use in commercial affairs (conflicts that emerge in the business and labour sphere), civil affairs (breach of contracts, problems with property, and so on) and family affairs (conflicts deriving from separation, divorce, crisis of cohabitation, shared child custody, and so on).

Specific section on mediation in private law provided by the Ministry of Justice. The institution specialized in this kind of mediation in Catalonia, summarized on this webpage, is the Private Law Mediation Centre of Catalonia.

Issued in 2009, it is a pioneering law in Spain. It broadened the scope of mediation to any personal or family conflict and extended mediation to the civil law sphere.

Compilation of the courts that offer civil mediation services in Spain.

Compilation of the courts that offer commercial mediation services in Spain.

Family mediation attempts to settle disputes arising among members of the same family. From breakups (separations - divorces) to parent-child relationships (shared custody) and other actions related to parenthood (successions, inheritances).

Publication that explores the concept of family mediation as a method of dealing with family conflicts. It reviews family mediation in Spain: the motivation, objectives, procedure, parties involved, and so on.

Article on the factors involved in the success of family mediation, which also identifies the variables that determine its efficiency.

Compilation of the courts that offer family mediation services in Spain.

The document is part of the "We share knowledge management" programme of the Catalan Ministry of Justice. It sets out what mediation is, its methodology, the role it plays in the judicial context and the family mediation process.

The resource belongs to Diario de Mediación, a digital publication specializing in mediation.

This mediation is an alternative to traditional penal justice. It is aimed at people affected by a crime and who have suffered the consequences, both victims and perpetrators.

Section on penal mediation of the Spanish General Council of the Judiciary. It includes a brief introduction and sets out the objectives, forms of participation and other related contents.

Publication examining penal mediation of minors as an out-of-court method to deal with juvenile delinquency. It features an analysis of the theoretical foundations and the applicable regulation.

Compilation of the courts that offer penal mediation services in Spain.

Webpage of the Catalan Society for Mediation in Health (SCMS). Provides additional information on what mediation is, its impact in the healthcare sphere, the services offered by this institution, and so on.

Article published in the Revista de Mediación on intervention in healthcare conflicts through mediation with arguments in favour.

School mediation aims to teach harmonious relations between students and their peers, teachers and other members of the school environment.

Book that approaches mediation as a strategy to deal with conflicts in schools. It provides reflections and good practices to respond to conflicts emerging in the school environment.

Publication that sets out the culture of mediation in ten principles. The education community uses mediation as an interpersonal conflict management mechanism to obtain positive responses.

Book dealing with the different conflicts in classrooms and the mechanisms to resolve them.

Community mediation focuses on the resolution of neighbour and social conflicts, between people in the same neighbourhood, town, and so on.

Compilation of different experiences of community mediation and alternative dispute management and reflection on these experiences. This book is arranged in two very different sections: on the one hand, it includes an assessment of the experiences thus far and, on the other, sets out the conflict management criteria that can be considered good practices.

Publication by Barcelona Provincial Council dealing with conceptual elements of community mediation and some proposals for action in towns.

Conflict resolution on Wikipedia. Provides general information, theories and models, etc., as well as links on the subject.

Book about Conflictology as a discipline designed to help solve problems according to each person's way of studying from a perspective removed from the legal system.

Conflict management manual. Provides a set of resources to identify the conflict and how to act accordingly.

Book summarizing the nature of conflict, its theoretical basis, its methods, etc., for professionals, students and the general public.

Mediation around the world

Representation of organizations and institutions, reference documents, legislation, etc., which can help us understand the impact of mediation in different regions such as Catalonia, Spain, Europe, the United States and Latin America.

Section on mediation in private law and on legal redress of the Ministry of Justice of the Government of Catalonia.

Set of statistical data on mediation in private law in Catalonia of the Ministry of Justice of the Government of Catalonia.

White paper with a study on "a complete mapping of experiences in mediation in all social spheres." Considered a tool to promote and consolidate mediation.

The Mediation Centre of the Barcelona Bar Association (CEMICAB), which aims to promote and intervene in the sphere of mediation and provide guidance.

Presentation on mediation by the General Council of the Judiciary.

Set of statistical data on intrajudicial mediation in Spain.

Compilation of the courts that offer civil, penal, social, family, commercial and contentious-administrative mediation in Spain.

Compilation of Spanish and European regulations, autonomous community legislation and sentences on civil and penal matters.

Database to provide citizens with access to mediation as a means of conflict resolution. Also provides access to the mediator and search engines of mediation institutions.

Not-for-profit organization aiming to promote mediation as a method of conflict resolution.

Section on the panorama of mediation of the European e-Justice Portal.

Reference document, based on the experiences of UN members, for conflict resolution through mediation.

European directive, currently applied to all Member States, on mediation in civil and commercial matters.

European mediation network. Formed to support the development of mediation, search for new forms of conflict resolution, exchange of experiences, development of principles, ethics and standards, and so on.

Association formed by judges that work for conflict resolution.

Mediation in the United States

United States organization devoted to defending peace throughout the world and the study and research into international conflicts (political, economic, social, ethnic, etc.) which make it impossible. Its website contains all kinds of information about it: lines of work, actions, peace education programmes, library, etc.

Web portal on alternative dispute resolution in Latin American countries. Developed in the framework of the European project EUROsociAL.

Collection of key autonomous community, state and European community regulations on mediation. Not all these mediations have a specific regulatory framework for their application.

Compilation of regulations on mediation, published on the website of the Poder Judicial (Spanish Judiciary).

Compilation of the main autonomous community legislation on mediation, on the website of the Poder Judicial (Spanish Judiciary).

Collection of European regulations on mediation, on the website of the Poder Judicial (Spanish Judiciary).

Sentences on civil matters featured on the website of the Poder Judicial (Spanish Judiciary).

Sentences on penal matters featured on the website of the Poder Judicial (Spanish Judiciary).

There are many periodical publications and books that deal with mediation from different perspectives.

Journal of Conflictology link opens in a new window

An open-access, interdisciplinary, peer-reviewed journal devoted to conflict resolution. It is premised on the belief that non-violence is an effective means of defusing conflict and, to this end, promotes it as a method for both resolving and managing conflicts.

Bi-annual online access journal on mediation and alternative forms of conflict resolution. This journal is integrated with the Maynooth University ePrints Archive to provide an institutional repository that showcases the research output of this institution.

Open-access journal revised by experts, with articles on all areas of law and conflict resolution.

The Journal of Conflict Resolution link opens in a new window

Compilation of lessons learned from the United Nations Peacemaker.

UN guidance material for setting up and managing mediation initiatives.

Lawyers and Mediation link opens in a new window

Book on mediation and lawyers, the story of their link, the initial reticence of lawyers in terms of mediation, the current relationship, and so on.

Work with simple concepts that explain what mediation is and how it is used.

The compilation includes books, some of them online, articles, organizations and online resources. There is also an online document aimed expressly at social intervention professionals.

Includes texts referring to training, court cases and case studies, the evolution of mediation, its most controversial aspects and comparative studies.

The author explains the theoretical bases as well as the techniques and strategies that any good mediator should have. She also sets out her own model and analyses the present and future of mediation.

We now suggest some less academic material for you to explore the concept of mediation.

Interview on Els Matins, on Catalan TV channel TV3, on the European Day of Mediation 2014, with Rosa Torre (Director of the Private Law Mediation Centre of Catalonia) and Montse Mir (mediator and lawyer).

YouTube playlist on mediation of the Ministry of Justice of the Government of Catalonia.

Debate on mediation, on TVE 2.

Collection of videos on mediation provided by the United Nations Peacemaker.

Simulation of a real mediation case of the SIGNUM Foundation. 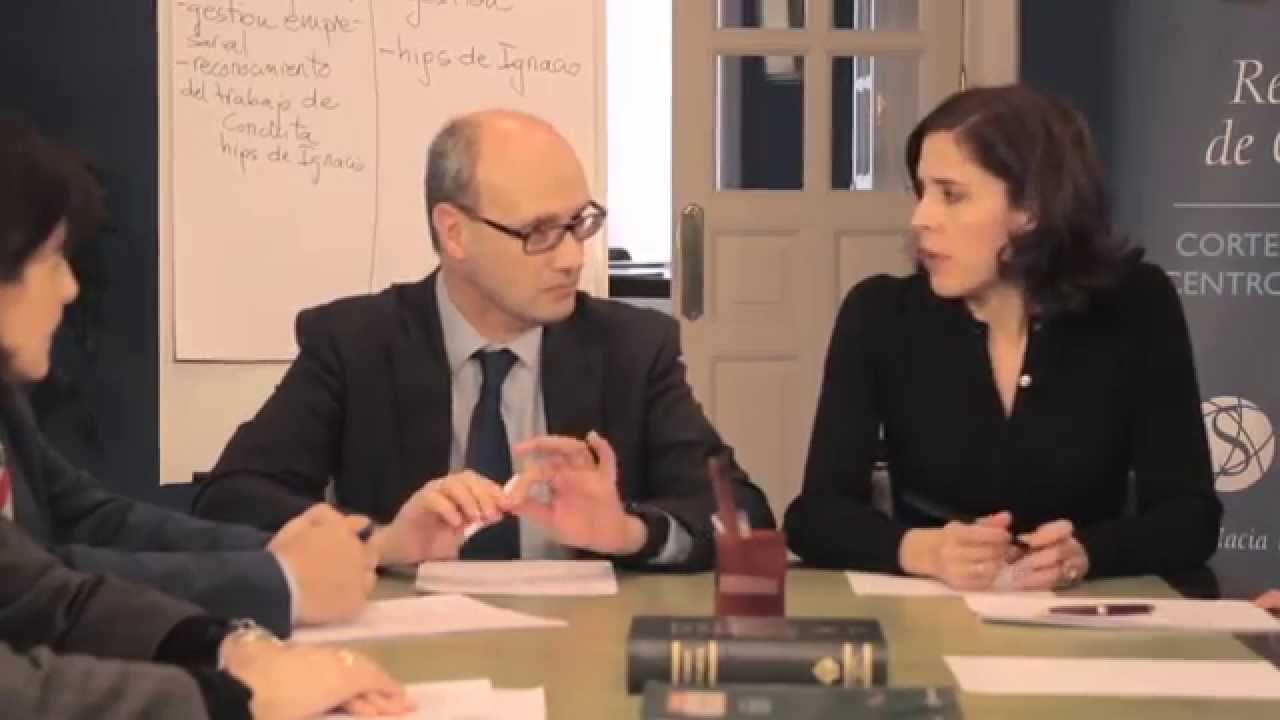 YouTube channel of the SIGNUM Foundation for alternative dispute resolution.

Blog on mediation by Wolters Kluwer.

A Mediar link opens in a new window

Blog of Tomás Prieto on mediation. Winner of the AMMI Award 2015 for best mediation blog.

Debate and participation blog on mediation as a conflict resolution technique.